Cinderella Story (It's in the Hole!) 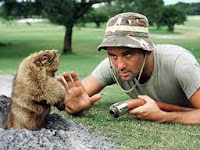 It's been thirty years since Bushwood Country Club's assistant greenskeeper Carl Spackler (a.k.a. Bill Murray) uttered these immortal words, which rank 92nd in the American Film Institute's 100 top movie quotes of all time from US films:

And while the Crosby (oops, I mean the Pebble Beach National) Pro Am isn't the Masters and Bill Murray was never a greenskeeper (at least I don't think he was), this past Sunday fiction sort of morphed into history. In case you missed it, Bill Murray and his professional playing partner, D.A. Points, won the Pebble Beach Pro Am title (Points also won the professional title). Again, it isn't the Masters but definitely a "Cinderella story."
Posted by Sean F. Everton at 7:03 AM