No likes an "I told you so," but since March, I've been predicting that President Obama would be re-elected, which (as another site puts it) may have "struck many people as absurd... [since] there were [still] nine months of campaigning left, [including] two conventions, several billion dollars worth of advertising, four debates, and untold bumps in the road for both sides" ("Forecast Goes 50-50 with Florida Outstanding"). 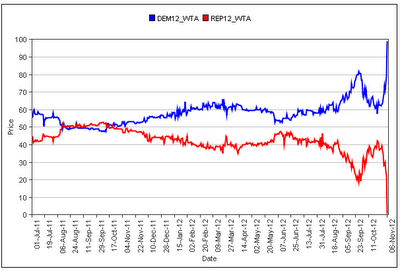 Such sentiments ignore the remarkable accuracy of prediction markets, which are speculative markets where players bet on a particular outcome (e.g., Presidential elections, American Idol winners), and current market prices are interpreted as the probability of the outcome occurring. The two graphs above are graphs from two prediction markets, Intrade (top) and the Iowa Electronic Market (IEM) (bottom). Note that the Intrade market began predicting an Obama win in February (where the line rises above the 50% threshold), and the IEM began predicting an Obama win (blue line) as far back as November 2011.

The moral of the story? There are at least two. One is that whoever the Republican nominee was, he (or she) never had much of a chance. The Romney campaign will inevitably be the target of a number of criticisms. Some will argue that he was too conservative; others will argue that he wasn't conservative enough. Both conservative and moderate Republicans will argue they now have a mandate to move the part in their desired direction. My sense, however, is that Romney did as well as could have been expected. That is, a more conservative or more moderate candidate would probably not have faired any better. The reason why is that for the past year, the election has been Obama's to lose, and he didn't.

Second, four years from now, don't listen to the pundits (they typically focus on unimportant details), don't be swayed by the opinion polls (too much variation), and don't pay attention to who wins the debates (they seldom matter). Instead, follow the prediction markets. Personally, I recommend PredictWise, which culls information from other sites, such as Intrade and IEM. Indeed, in February of this year PredictWise predicted that Obama would win 303 electoral votes, and Romney would win 235. If Romney manages to win Florida, that is exactly how it will turn out. Even if he doesn't, PredictWise will have correctly predicted the outcome of 50 out of 51 states (51 if you include Washington DC). Not bad, considering that at the time, we didn't know who the Republican candidate was going to be.
Posted by Sean F. Everton at 6:24 PM